France lost its AAA rate: is this tragedy what we think it is? 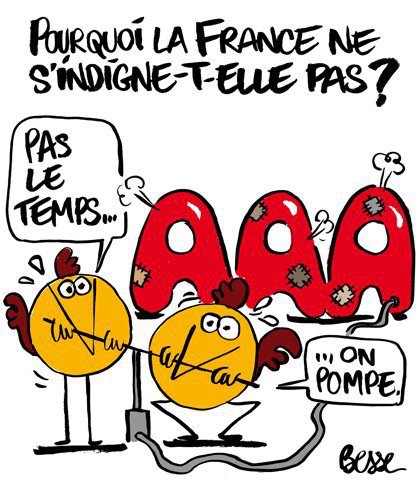 Friday February 13th, France saw its AAA credit rating downgraded to AA+. This decision is felt as a tragedy by economists, politicians, and medias from all allegiances.

What does this general panic mean? It is as if everyone considers financial regulations as natural and immutable, to the extent that they have resigned themselves to these malfunctions agreed to accept pseudo-solutions, instead of questioning the monetary and financial system.

At first glance, the downgrading means that France solvability is falling. In fact the debt amounts to 80% of the GDP, whereas it was 8% in the late 70s. It also means that France will only be able to borrow at even higher rates.

The tragedy is that the media-political field does not ponder over the structural origin of this debt; subjected to the economic machine with its tragic social, environmental and anthropological consequences.

Let’s go back to the function and the creation of money. Money facilitates the exchange of goods and services, allowing to defer them in time and to multiply the contributors. Furthermore borrowing money from a person, who has got money already, makes it possible to anticipate wealth production.

For the good functioning of the economy, it is necessary to issue the amount of money required for the circulation of the entire wealth produced. Money has no value in itself; it has value only through the goods it circulates. This is why printing too much money is useless, since it loses its value and leads to inflation.

In all logic, it ought to fall to civil society, that is the state, to create the necessary amount of money required to ensure the flow of goods produced. But since the 1970s, but notably after the Lisbon Treaty, Western States are no longer allowed to “ create” their own money, they must “borrow” from private banks (investment banks1). This implies that this money is deemed to exist already and it allows the state to borrow, in the same manner that individuals can borrow from an agency possessing reserve funds: but this is not the case.

In fact, to fulfil the need for money creation, states buy money from private banks. These banks don’t have this money and they charge a high interest rates for creating it. Masked by the subterfuge of the vocabulary relevant to the domestic sphere, this outrageous fraud has gone unnoticed for 40 years!

This law has not been passed out of the blue. It does not fulfil a natural need, it has another function. It gives the oligarchy the opportunity to increase its wealth by using two mechanisms. Firstly, it can appropriate the greater part of the wealth produced by capital and finances by playing with the interest rates. Secondly, it artificially inflates the amount of wealth. Growth is fantastic for some to get scandalously rich, whilst people don’t begrudge anything: that is because a few crumbs are always left for them. It is far easier than to share.

This law has been passed because the debt unashamedly fuels consumerism

Because of the debt, states are forced to organise and structure an increase of GDP in order to augment fiscal revenues. Without growth, no taxes. For the last 40 years Western countries have reached a saturation level of material goods, and lived with an artificial growth fuelled by debt. Without this structural debt – also called “The Crisis”, natural growth would have likely been more equitable and sustainable, less substantial, therefore easier to distribute equally to go unnoticed.

In short, humans are at the service of the debt…and of those who take advantage of it.

But the system has reached the limits of the ecosystem.

All the countries are indebted. Humanity is indebted. But to whom? Creating this debt equates to allow for the exploitation of the natural resources, without showing concern for their incremental depletion. The debt crisis results from the collision between the frantic consumption of renewable resources and the limits of the ecological reality. Growth creation through financial products cannot go on for much longer without relying on concrete resources. The financial bubble is about to implode. Peak Oil and “peak everything” has been reached and/or are about to be reached, sooner or later, climate change pushes us to moderation. Many contemporaries realise that capitalism is not delivering its promises of a good life for all. The production and consumption machine is getting jammed.

Then, “they” are running around like headless chooks. The press release from the rating agency relating to France’s downgrading stipulates that France must pursue structural reforms and, at the same time, that growth levels are not sufficient. It is the double-imposture of the “rilance” (stimulus, re-launch), at once rigour and stimulus: oxymoron politics at the service of the oligarchy; the double whammy that can make us mad if we don’t take notice.

Every one follows the rules of an unnatural game, instead of using this opportunity to question the meaning of production, consumption and money.

It is necessary to prove these arguments to rest once and for all. It is also important to offer some answer such as transition initiatives and tools for a sustainable and serene world. This is why the Growth Objectors join with groups, at the local and national levels, requesting a citizens’ audit of the debt and they organise public debates. This approach is a way to destroy the neo-liberal “doxa” which prevents calling the system into question, “There is no alternative”, said Thatcher. This tool gives the public the means to get involved. It is tool to produce arguments. It gives the means to request access to hidden documents. It is the means to create a balance of power. Requesting a debt audit is necessary to expose the official propaganda. Let’s create a sustainable and equitable planet. Let’s give production its main function back: let’s treat material goods as agents of our wellbeing rather than an end in themselves. Lets give money its original function back: a trade mechanism and let’s be watchful that it does become the source of social conflicts. Let’s investigate the pathways and the tools of transition: open relocalisation, human-scale agriculture, UAA (Unconditional Autonomy Allowance) inclusive of the MIT (maximum Income Threshold), free usage and penalisation of misuse.

The task of creating the necessary amount of money to facilitate the circulation of wealth must revert to democracy through its legitimate institutions. Let’s declare the debt illegitimate in order to stop producing for the sake of it. Growth society is not the solution: it is the problem!

– Who killed economic growth (video)
– The debt crisis: plan B comes from oBjection to growth