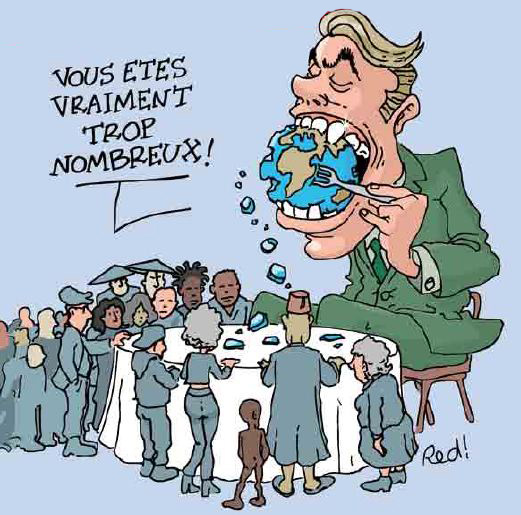 Too often, the growth objectors sweep aside the demography debate with this kind of joke. Are there too many of us on earth? Do we support world population growth? If so, how and to what extend? If we do not consider these questions as primordial, they are asked too often. A simple joke is not sufficient and it proves that these questions must be debated.

1) Degrowth is a new multidimensional and radical political project, that is what constitutes its coherence:

Degrowth is built on two approaches:

–          The physical limits of growth with the need to build a transition. Reflections on the demographics question form just a part of this approach.

–          The cultural limits of growth and the desirability of new societal projects. That is “buen vivir”. (living well).

We are faced with converging crises. Therefore, finding solutions to this anthropological crisis does not mean that treating the symptoms the dead-end growth society brings us closer to (including the population explosion) is sufficient, but, on the contrary, we must try to understand the essence of this process in order to address it at the roots level. That is why we think we must establish a democratic and peaceful transition towards new sustainable and desirable societal projects. We must start from our given society: the way it is psychologically, culturally, socially but also institutionally, politically, economically and demographically. This transition can only be democratic and serene only if we can find political, economic, and social policy levers that trigger involvement and participation.

To limit the debate to demographic decline, or even to decrease the ecological footprint of the richest people, is counter-productive and risky:

–          It is counter-productive since if being right did suffice and if humans, mainly the policy makers, were only guided by rational thinking, the world population would have been restricted to a number deemed optimal by the experts. We would have abandoned growth society and would have put a stop to this mad race where a minority dominates the majority and we all dominate nature… Unfortunately, or fortunately, human beings are not rational and got entrapped in this growth delirium.

–          Risky, dangerous even, since limiting the debate to a question of number of people opens the gates to disturbing eugenic policies, we do not manage world population the same way we do a car fleet. It allows for the scrutinisation of the submerged part of the iceberg (the meaninglessness of growth society!) and could become an efficient tool for the authoritarian oligarchy so that it avoids challenging its position of domination. Furthermore, we have already seen on one hand the inefficiency and on the other hand the disastrous consequences of the anti-natalist policies (eg: the one-child policy in China)!

So our position does not support either an anti-natalist policy (since when, not having children leads to a society with a future?), nor pro-natalist policies which were and still are part of the morbid productivist and economic competition logic: to have more canon-fodder and productive forces. We must leave the Malthusian pro-natalist duality on this issue. The challenge is to try to understand correctly the problem in all its multidimentional complexity and to try to think, build and experiment with uto-paths and this transition, which is already underway.

2) Feeding the world and Degrowth? Demography and social and environmental inequalities:

While we are producing enough food to feed everyone in the world, more than a billion people are malnourished and many millions, especially children, died of hunger every year. Worldwide another 1.5 billion people are obese. In fact, today, more people die from obesity and bad nutrition than from hunger! Therefore, the problem is fundamentally systemic and political.

Thus, the issue of food production and the way we produce it is fundamental. The same applies to our mode of eating, mainly the amount of meat we consume. An FAO (Food and Agriculture Organisation) study used by Jean Ziegler, says that we can feed 12 billion people with a sustainable agriculture of proximity without eating meat.

It is certain that without the demographic growth of the last decades, the situation would be simpler and it does not mean in any way that we ought to reach a world population of 12 billion. This shows that the demographic question, at 7 billion is not today’s number one problem. It is nevertheless an important factor but not the only factor needed to solve the problems.

Above all it is a matter of a just and democratic choice: sharing of the land, food, energy, organisation, what type of agriculture, food, solidarities, economic models, policies etc… we support.

Today, whether through development politics supported by institutions such as the IMF or the World Bank, or the development of the criminal bio-fuels, or the mad rush for land appropriation in Africa or South America, or the European agriculture, we are doing exactly the opposite of what we should: we expropriate small farmers, we destroy food-crops and the social associative networks, the know-hows, we make our farmers dependent on multinationals (through the patenting of the living) and fossil fuels (fertilisers, pesticides, mechanisation, conditioning, packaging and distribution), we are destroying the soils by polluting and depleting them, and we are destroying biodiversity.

We are dealing with different phenomena and dynamics classified along these lines:

–          Development of Western lifestyle and consumption modes, especially meat consumption, which is neither sustainable nor extendable to all and even less sustainable (whatever the level of the world population!).

–          The development of an intensive agriculture for reasons and consequences mentioned above.

–          A transition to another difficult model if it is not set up shortly, for example in Europe: stopping the importation of oil can be done instantaneously and our reserves would only last for a few weeks, whereas the rehabilitation of our over-exploited soils might take several years!

–          Unwanted world population growth, which is slowing down but it will take a long time.

Therefore we must first play on the first three points in order to live in a sustainable and just way. The fourth one must also be taken into account. But, the decline of the world population must be inscribed within the framework of a serene and democratic transition, not based on coercion (eco-fascism?), nor trough delirious barbaric schemes (anti-natalist authoritarian politics, eugenics, engineered famines, pandemics, wars, etc….). While the neo-liberal oligarchy restricts itself to lethal family planning and contraception programmes without wealth redistribution, objection to growth aims for a transition, thus a fairer wealth redistribution; one of the major conditions for a lower desirable birth rate, through women’ emancipation, their access to education, their personal and professional autonomy.